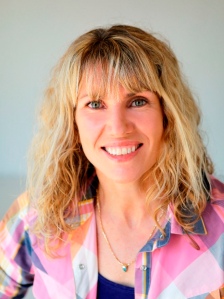 Kirsty Eagar is an author and economist. Raised by her mum and grandma under the big skies of Capricornia, she grew up riding horses, went to a small country school where shoes were optional, and was always allowed to read at the dinner table. Her Young Adult novels have won and been shortlisted for numerous awards including the Victorian Premier’s Literary Award, the NSW Premier’s Literary Awards, the Queensland Literary Awards, the Western Australia Premier’s Awards and the Gold Inky. She lives on Sydney’s northern beaches with her family, where she surfs most days. She is proud to be an ambassador for the Stella Schools Program and a contributor at White Horses surf magazine. 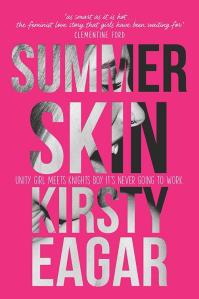 A while back I quit my career job and my partner and I travelled around Australia for a couple of years, living out of a four-wheel drive. I worked in kitchens a lot during that time, which was more physical work than mental, and I think the free headspace plus reading Stephen King’s book On Writing created an explosion of energy that meant I not only started my first novel, but I also finished it. I’d been wanting to write a novel for a long time, but that was the first time I’d felt empowered to do it. Sadly, it was horrendous. I knew it, too, but for some reason I kept going. I worked on it for another two years and then sent it to a well-known agent in London, who loved it and put it up for auction. Nobody bid. I tried again, this time writing something more Australian. It lost me the agent, who didn’t want Australian.

I gave up on getting published and decided to write the book I was dying to write. That book was Raw Blue, and it was the first I had published. What’s important, though, was once I started it I didn’t give a toss about what the outcome was going to be, and that was good because it meant I didn’t hand it over until it was well and truly realised.

I’ve got a new book just out called Summer Skin. It’s a uni novel, a love story, and it’s taking a look at sex and intimacy in the hook-up age. I spent four years at a co-ed residential college and I wanted to write a book that was set in one. I think my only other agenda was it had to make me laugh.

I’m currently working on a Young Adult novel called Molasses. It’s set in Capricornia. You can see the map of the region I’ve got up on my wall in the photo below. I don’t actually need it geographically speaking, but it’s a visual cue that’s supposed to make me spring to my desk and work. Ahem.

I have strategically taken the photo below so that you can’t see the mess in case it hurts your head. It hurts mine. But I have to be in the MOOD to clean up, and that only happens once a year—generally at the start, so I seem to have missed the boat this time around. 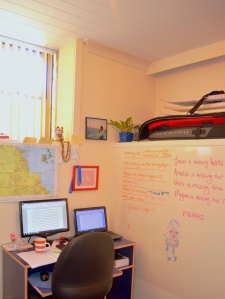 But for those of you who are curious, and/or messy and want to sympathise, I thought I should include the below in the interests of full disclosure: 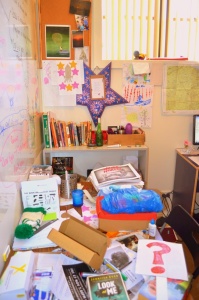 Kirsty’s office as is

Interesting fact: I’m allegedly a Virgo. You’d never know it. All of that mess is stacked on a desk I bought at a garage sale for $20 which was my first real writing desk. I love it, and when I can actually see it I like sitting there to brainstorm in longhand.

I work during the day, usually early morning until lunch time, and then I go for a surf. After that, I try to squeeze in a bit more before my kids get home from school. The exceptions are days that I’m booked to do a school talk or workshop—they’re usually a write-off. When a story is going well, or I’ve got a deadline for an article, I work nights quite willingly. Otherwise the thought of going down to my office after making a meal (the tyranny of meals!), helping with homework and putting my kids to bed is about as appealing as pulling my skin off. I’d rather have a glass of wine and watch Survivor or The Walking Dead instead. I hope this changes sometime and I become a driven, achieving type, but I’m not holding my breath.

The first draft is drawn out and meandering and it’s when I work out what the story actually is. I tend to nail the first 15,000 words, push through to the middle, and then repeat this process umpteen times before I finally commit to one final push to the end. Subsequent drafts are generally about structure and I will often do a lot of new writing rather than try to hold on to stuff that isn’t working. I’m constantly polishing—it’s a form of procrastination for me.

Most of the time it’s just hard, but every now and then when it’s going well and I’m completely into the story I float around real life in a state of bliss. It’s like being in love. Everything is heightened. It doesn’t happen often but it’s very addictive.

Good writing, art, film, athleticism and entrepreneurship. And my mother, who is sixty-eight and still working on the land. Growing up things were very tight money-wise, and there has certainly been tragedy in the last few years, but she remains the most indomitable woman I have ever met. She rides horses, loves her cattle, drives trucks, tractors, excavators, has donated thousands of acres of land to native refuge and is currently completing her PhD in Ecology (land management). Having her as a role model helped me to know that you can pursue an obsession, and that struggle is the one constant, so if you don’t like your struggle, do something else.

Accepting that a lot of it is out of my control. Life works better when I’m creating and that should be reason enough for doing it.

I spent too much time thinking and plotting about ways to get there (meaning, to get published) when I should have spent that time on the work. I was anxious that it would never happen, but it was when I stopped worrying about that and really concentrated on the writing that things changed for the better. Probably something I had to learn for myself, though.

It varies from book to book, so at the moment it’s about fully realizing the rural area where I’m from, and then crafting a story that’s wild, big and brave enough to do the setting justice!

Oh, wow, there are so many. The majority of my favourite authors are female. The person I have been reading all of my life is Tove Jansson. Six picks who have blown my mind in recent years are Jennifer Egan, Karen Foxlee, Honey Brown, Justine Larbalestier, Megan Abbott and Maya Angelou.

And thank you, Nova Weetman, Ellie Marney, and Pip Harry, for recommending Kirsty!