I had the great pleasure of attending All About Women 2018 at the Sydney Opera House this past Sunday, dreary weather be damned. In previous years, I’ve gone to mostly literary events, but this year I opted for two panel discussions: Disability & Intersectionality, and Grabbing Back: Women in the Age of Trump.

AAW has received criticism in the past for failing to include disabled women in its line-up, so it was great to see them responding to this feedback with some proactive programming. It’s also worth noting that this event was both accessible and Auslan-interpreted, which should go without saying given the theme; unfortunately, I think most people with disability would agree genuine accessibility always feels like an unexpected win.

Van Badham chaired Kath Duncan, Katharine Annear, and Samantha Morton in a lively discussion about, amongst other things: language constructs and means of self-identification; inclusion and / or exclusion from abled feminism; historical vs. contemporary perceptions of disability; accessibility or lack thereof at events and within communities; statistics of abuse amongst disabled women, dovetailing into the additional risks for Indigenous women; and ways to not only include but empower marginalized women.

A couple quotes from the speakers that really resonated with me:

“We are more disabled by society than by our impairments.”

“It’s great if the NDIS helps you get a new wheelchair, but you need a community to roll out into and be part of, and this is especially true of older disabled individuals who are being shut out.”

“We disabled people are very good at getting together talking about disability but we need to work on infiltrating other spaces.”

“If you’re an activist, it’s your job to reach out to the people excluded by extreme marginalization — not as their great, white saviour, but as someone trying to create spaces in which powerless people can find their own power.”

“Disability Studies seems more open to this idea of intersectionality than Feminist Studies.”

After an audience member asks about legitimizing invisible illness and disability: “A lot of this conflict comes from the history of using a medical model to categorize disability. Those with visible disabilities are overwhelmed with medical attention while the invisible are still largely ignored. But this is shifting as we move towards social activism.”

In Grabbing Back: Women in the Age of Trump, Chair Julia Baird led Francesca Donner, Sophia Nelson, and Fran Lebowitz in discussing first of all, how Trump actually managed to become President, what sort of impact he has had since assuming leadership, and what kind of legacy he’s likely to leave.

Now, I should preface this recap by saying there are obviously people in the US who voted for Trump, but he has very few supporters here in Australia. So, this particular audience being almost unanimously anti-Trump was expected. And given the overriding political persuasion of the crowd, I would have liked to see this discussion take a bit more of a How-To approach, rather than just bolstering the general sentiment of opposition. Still, what I did appreciate is that there was some genuine diversity on the panel in that the women didn’t just readily agree with one another on every point.

For example, when asked about the #metoo movement, Fran Lebowitz said she didn’t necessarily think it was spurred on in part as a revolt against Trump but rather came about because Weinstein had already started to decline in influence, leaving him more vulnerable to a take-down than he was in earlier years. In contrast, Francesca Donner did think politics had influenced the movement by setting the stage and opening the pathways for people to begin sharing their stories. 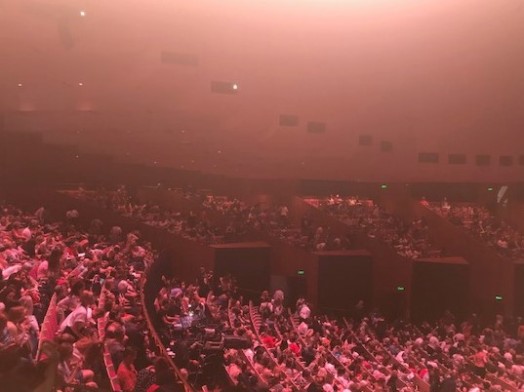 Later, an audience member asked about gun control, which drew a sharp intake of breath from the crowd. Sophia Nelson said she supported the second amendment but felt some level of control was needed to protect the public from assault weapons. Fran Lebowitz argued that she did not stand behind the second amendment but was pessimistic about the possibility of change. “The best way to protect yourself is to live in NYC and have a doorman!” she asserted.

Some more quotes from the panel:

“Trump ran very openly and just said what people were thinking. He capitalized on the current backlash against people of color and women. It was about demographics and the fact that his celebrity status as a reality star keeps the media going.”

“Why did white women vote for Trump? Because they were protecting their husband’s economic interests.”

“We’ve got to start talking about our boys, brothers, men. We’ve got to teach them to value women. That is the part of the conversation we’re not having.”

“The red carpet kicked things off but we need to think about the ordinary everyday women no one sees or hears, the ones who can’t speak because they aren’t visible, privileged or respected, and they’re in danger.”

“I remember every second of Kennedy’s assassination, 9/11, and the Trump election.”

“Reagan was the template for the stupid president. Having a stupid president makes people feel good about themselves. They would rather the chance to express their own bigotry than worry about lies.”

“Trump was never a businessman. He’s always been a cheap hustler. And what he’s doing now affects the whole world — not just the US.”

That’s it from me. Happy International Women’s Day to you all, and hope to see some of you at next year’s All About Women!