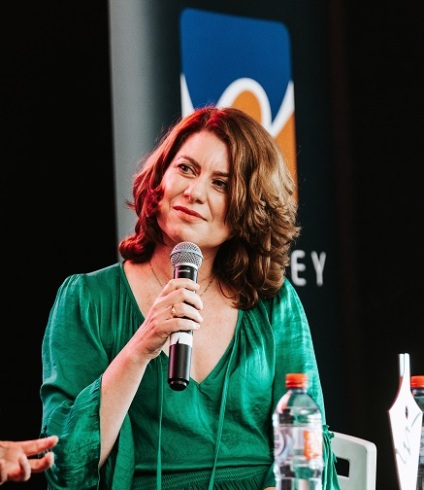 On 31 March this year, my third novel, The Deceptions, was released into a world heading into lockdown.  It was not the launch I had anticipated.

At the outset, I’d been hesitant to even write the book.  Partly it would be set in wartime Europe and I was reluctant to embark upon the substantial research this would require.  But the story wouldn’t leave me so, in the end, I decided to just get started, write it out and be done with it.  Even if it didn’t work out, once I’d done something with it, at least my head would be free enough to let me get on with the next project.  So I started writing.

The idea for the novel had come from a story told to me by my former landlords, Fred and Eva Perger, who were Czech and Jewish and who had survived the Holocaust.  As teenagers, they had been sent with their families to the Jewish ghetto of Theresienstadt.  They were more fortunate than many, for they believed themselves protected from transportation to the east.  This was because Eva’s father, Dr Franz Fischer, was a doctor whose skills were of great demand in the ghetto.

The ghetto was guarded by Czech gendarmes.  When one of the gendarmes broke his arm, Dr Fischer set it for him.  To thank him, the gendarme offered to smuggle correspondence out of the ghetto for Dr Fischer and his family.  It was an excellent arrangement that might have lasted indefinitely, had the gendarme not been accused of Rassenschande (race shame) for his illicit relationship with one of the Jewish detainees.  During the interrogation that followed, the gendarme’s notebook was confiscated, in which he had recorded Dr Fischer’s details.  Soon afterwards, Dr Fischer was arrested.  The gendarme and the Jewish woman said to be his lover were also arrested.  While the gendarme returned to Prague after the war, of the woman’s fate, Fred and Eva knew nothing.  They’d never even known her name.

Over the years, I found myself wondering what had happened to this unknown woman.  I didn’t have enough information to research her actual life – I didn’t even know her name – but still, I couldn’t stop thinking about her.  So I decided to turn to fiction instead.

When I really began writing, I became immersed in the story of the woman I called Hana.  For me, she was fierce and arch and dry: a woman who, in order to survive, had agreed to a relationship with her guard.

Once I’d committed myself to the story, the writing progressed well and when the manuscript was finished, to my relief, both my agent, Margaret Connolly, and my publisher, Jane Palfreyman, were pleased with it.  A contract with Allen & Unwin soon followed.

The book was beautifully shepherded through the editorial process and the jacket cover designed by Christa Moffitt perfectly encapsulated the mood of the novel, with its crisp white background and bare birch trees.

Before its publication, the book was promoted to booksellers who responded enthusiastically.  On its publication, I was told, The Deceptions would be everywhere: in the independent bookshops – so vital to writers and the publishing industry – as well as in Dymocks, QBD, Collins, Big W, Target, Booktopia and Amazon.  It would also be made into an audiobook.  I’d pitched high and asked for the actor Zoe Carides to narrate it.  To my astonishment, she’d agreed.  I’d also been invited to so many literary festivals and so many other literary events.  Never one for big parties, I’d organised a wonderful book launch to celebrate.  It was all so exciting.

‘Wow,’ I marvelled to my agent as the publication date got closer, ‘it’s all gone so well.  What could possibly go wrong now?’

It has since occurred to me that it might well have been my smugness that actually caused the coronavirus.

What could possibly go wrong?

What about this, thunders the world right back at me, what about a global pandemic?

For some weeks I watched it all unfold: the snippets in the news of this strange virus in China, Iran, South Korea, Italy, the UK , the USA – and here.  It will be all right, I tried to reassure myself.  It will be fine.  But the medical experts I followed on Twitter didn’t seem so sure.

Then the first cancellation came through: Newcastle Writers Festival.  This was followed by Sydney Writers Festival, Melbourne Jewish Book Week, Storyfest then all the others, my own book launch included.

Once I’d recovered from the disappointment, I took a look around and knew what I had to do: I had to go digital, and fast.  So instead of launching my book surrounded by people, I launched it on Facebook Live.  I planned my online bookclub: Thursday Book Club with Suzanne Leal.  I sent out a newsletter to my friends and readers.  I took part in Newcastle Writers Festival Online on Zoom. I engaged online.  I made digital mistakes.  I wasn’t perfect.  But I got better.  And the online community of readers and writers greeted my efforts with support and kindness.  And so, surrounded by goodwill (and a lot of help from my indefatigable publicist, Laura Benson) one week ago, The Deceptions stepped out into this brave new world that now surrounds us all.

Suzanne is the author of novels The Deceptions, The Teacher’s Secret and Border Street. A regular presenter at literary events and festivals, she was the senior judge for the NSW Premier’s Literary Awards from 2017 to 2019 and is a board member of Sydney Crime Writers Festival. Also a lawyer experienced in child protection, criminal law and refugee law, Suzanne is a senior member of the NSW Civil and Administrative Tribunal and former member of the Refugee Review Tribunal. She is a fluent French and German speaker.