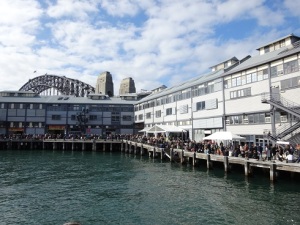 I went to 3 sessions this past Saturday at Sydney Writers’ Festival: The Rise and Rise of YA: A Look at the Fastest Growing Category in Fiction, Funny Girl: Why Women in Comedy Get the Last Laugh, and Mistakes We’ve Made and Other Lessons in Feminism. 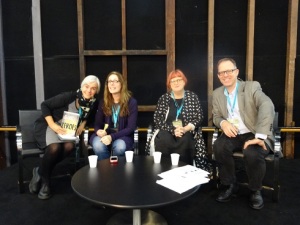 The YA panel consisted of Margo Lanagan, Laurie Halse Anderson, Sally Gardner and Garth Nix. Garth began with some statistics showing astronomical growth in YA sales. He pointed out that a lot of these sales were for ebooks, and as electronic publishing hasn’t been taken up as readily as expected by teens, this suggests that much of the recent success in YA can be attributed to adult readers. Margo added that twenty years ago she could read every single YA book that came out, but now the market has exploded to such a degree that that’s impossible.

In an effort to define the YA genre, Margo suggested that it runs up to about age 25, Laurie said it reflects an intensity and immediacy of emotion and experience, and Sally said it’s free from the box-like time constraints associated with youth in the form of class schedules, tests etc… that we all felt when we were actually there. Laurie and Sally both agreed that “YA” was the wrong label altogether, and Laurie suggested it should simply be called “Books That Don’t Suck.”

All the writers felt that the best way forward was to just ignore market trends and write whatever they felt compelled to write. Sally put it best, saying, “We are not fashion designers… Blast what the market does!”

In speaking to the issue of censorship, and the flack she received for writing Wintergirls in particular, Laurie said that most of the people challenging books were nice parents coming from a place of fear. Sally questioned why parents were so quick to attack books: “We [authors] know what we’re doing…but why don’t they turn off the TV?” She said she had been challenged on some of the profanity in her writing but felt that it accurately reflected what she heard on the playground just across the street.

In terms of what works well in YA, Sally said there can be no waffling; you just have to grab the reader and run as fast as you possibly can to the end of the book. Laurie said YA reflects the first stage of big transitions in a person’s life, but as you get older, you see how many more transitional phases there are (hence why she believes the YA label will eventually disappear). Margo said she could understand why YA appealed to adult readers too as we all like to read stories about youth and promise and hope.

When asked if they read YA themselves, all the writers agreed that they have to be very careful not to get other authors’ voices in their heads. They finished with some additional advice, with Margo saying you just have to keep writing, come hell or high water. Sally said it was important to read your work aloud to other people. And Laurie said you should never ask your loved ones to critique your writing, and that when reading aloud, she likes to record herself and then listen back as the ears pick up on different things than the eyes. 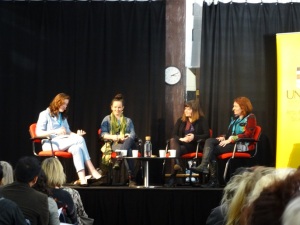 The comedy session was very much outside-the-box for me, and consequently, I found it really refreshing. This panel brought together Zoe Coombs Marr, Zoe Norton Lodge, and Vanessa Alexander, chaired by A.H. Cayley. I don’t have nearly as much to write about this one as there were a lot of anecdotes and ad hoc jokes that I won’t do justice to in print, but in serious moments, the comedians questioned whether the truism “Comedy = Tragedy + Time” was accurate and largely agreed that they didn’t always need that distance to reflect upon a negative experience—they could often see the humor in bad things even while they were still happening.

All of them had learned how to use their own experiences and female identity to better their craft. Vanessa related how she used to hide the fact that she had 6 children, but eventually realized she could get more mileage out of using her role as a mother to many for extra material, along with having a family full of doctors and relatives in jail. Zoe Coombs Marr, who does stand-up, which is a mostly male arena, said being an outsider helps because “It’s difficult if you’re a straight white male to make a joke about much.” She also introduced “Dave”, a character she created as a composite of some stereotypically bad male comedians she had shared a stage with in the past. Zoe Norton Lodge, who has written with the Chasers, said she feels less likely to get censored being female, and that it helps her get away with more. But Vanessa added that there isn’t much space for “bad” female characters like Basil Fawlty or David Brent, and unfortunately, female characters still have to be “likeable” to be celebrated.

There are no pictures from my last session of the day because photography is prohibited in the theatre and I’m a first-born and Capricorn, which is to say I’m constitutionally unable to break official rules. But the faces are so famous you’ve probably seen most of them before anyway: Annabel Crabb, Ayu Utami, Anna Bligh, and Amy Bloom, chaired by Tracey Spicer. This was an assembly of feminist powerhouses and the energy in the room was palpable while they spoke. Rather than attempt to quote each, I want to focus on why I think these women had such presence—both as individuals and as a group. These are women who have very strong opinions and every one of them gave the impression of being able to hold the microphone for the whole hour if allowed. In contrast, I have seen a lot of panel discussions over the years where the participants held back, didn’t put themselves out there, didn’t play off each other, or didn’t express anything too definitively for fear of either causing offense or simply being held accountable for their words. What impressed me with these proudly self-proclaimed feminists is that every single one of them wanted to be heard and wanted to make a big—and potentially lasting—impact on the audience. I must add, though, that Anna Bligh’s words stayed with me the most; I can only paraphrase but the gist is that we were talking about these things in the 80s, and she really didn’t think we’d still be talking about them today. All of the panellists agreed that they look forward to a time when the need for a feminist movement as such becomes obsolete and women are simply regarded as human beings and given the same rights as men. This is something that really resonates with me in that I would love to see this very blog become obsolete, but until women’s writing receives the same recognition as men’s… 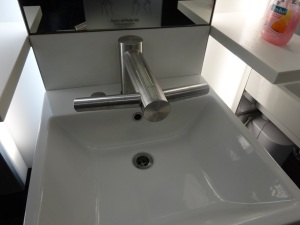 Since I can’t show you a photo of the feminist panel, I’m going to leave you with a pic of my favorite part of the festival: the tap / dryer combo in the Roslyn Packer Theatre. This apparatus has it all: it makes us yearn for the simplicity of our youth, it makes us look uncertainly yet hopefully towards a technologically and environmentally progressive future, it unites diverse groups of women in a common cause… If you hang around long enough, it also demonstrates the great universal balance between tragedy and comedy. I swear I even saw tears of laughter. “How do you make this bloody thing work?” “Does it have a button?” “Is there a lever?” “I think mine’s broken.” “Here, let me help you…”

And on that note, I think maybe Sydney Writers’ Festival should think about pulling a couple volunteers off the book tables next year and putting them by the sinks instead!