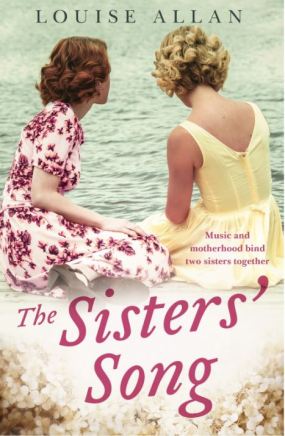 I was really excited to read The Sisters’ Song because I’ve gotten to know author Louise Allan over the past couple of years and I know how much hard work and passion has gone into bringing this book to life. At heart, The Sisters’ Song is about two women bound together by blood and broken dreams. Over a span of 70 years, we see how Nora’s accidental foray into motherhood epitomizes everything Ida ever wished for, while childless Ida possesses the one thing would-be singer Nora wants and can never have: freedom. The women’s relationship is fraught with envy, resentment, and a touch of schadenfreude, yet the close bond they formed as very young children continues to pull them in and out of each other’s lives throughout their days.

Set in a time when women had incredibly limited lifestyle choices, The Sisters’ Song shows how one’s circumstances were more often a matter of luck than anything else. It’s worth noting here, however, that all the central male characters in this story would pass for modern-day feminists. I found this really interesting as it further illustrates how significantly society must have oppressed these women for them to still feel so constrained even with the men in their immediate lives being relatively supportive.

I don’t read a lot of historical fiction, in part because I find it occasionally comes across as a bit of an info dump. However, I found myself forgetting that The Sisters’ Song was set in a different time period as all the historical detail was incorporated beautifully—it felt novel enough to be interesting, but never detracted from the plot.

I felt the same way about the Tasmanian setting. You can tell The Sisters’ Song was written by someone with a personal connection to Tasmania because the landscape isn’t just a backdrop but part of the story itself. Without ever running into big blocks of description, I was able to experience the weather, the seasons, and the topography of a place I’ve never visited on a visceral level.

This subtlety further extends to the way music is used throughout the book. I happen to know music plays a strong role in Louise’s own household, but she’s managed to take inspiration from her personal interests without showing off as an author—a hard balance to strike!

The Sisters’ Song is a rewarding book with rich characterization and reflection, but it should not be mistaken for a feel-good story. I found it hard to read in places as it jars with my sense of self—and accompanying wilful independence—as a twenty-first century woman. This is a book that refuses to wave a magic wand and “make nice” for its characters. There’s a strong current of disappointment and bitterness running from one end of the story to the other, interwoven with a wistful desire for what might have been.

Given the current socio-political climate and ongoing battle for women’s rights, The Sisters’ Song is a timely read. Louise Allan should be congratulated on a compelling debut, and welcomed as a fresh, new voice on the Australian literary scene.

The Sisters’ Song can be purchased here

6 thoughts on “The Sisters’ Song by Louise Allan – Book Review”