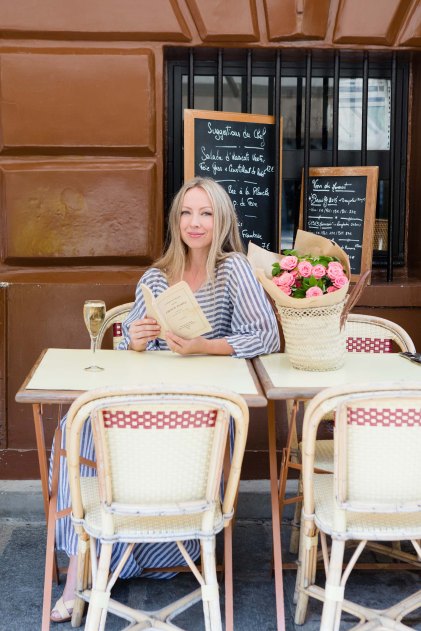 A beauty journalist for 20 years, Katrina Lawrence has mused on makeup, perfume and more for a wide range of women’s magazine and online publications. She is one of Australia’s most awarded beauty writers, having won a number of industry accolades, including two esteemed Jasmine Awards for fragrance journalism. Katrina lives in Bondi Beach with her husband and two sons, but her spiritual home will always be Paris, a city she has visited countless times (seriously: she has lost count) since the age of five.

What’s the blurb on your book, Katrina?

How the City of Light gave her lessons in life: an Australian beauty journalist shares her obsession with Paris – the city that has been her guide through a lifelong journey of self-discovery.

Katrina Lawrence first fell in love with Paris at the age of five, and since then her roads have continually led her back to this most beautiful of cities.

Taking us on a journey around Paris’s most spectacular sights, hidden secrets and most beguiling nooks and crannies, Katrina tells us the story of why this city has been her constant inspiration through all stages of life. Musing on everything Parisian, from femininity to feminism, politics to perfume, and of course, those stylish Parisiennes who captivate us, from Brigitte Bardot and Madame de Pompadour to Simone de Beauvoir and Catherine de Medici, Katrina shares the essential life lessons that Paris has taught her.

Written with warmth, gaiety, elegance and insight, Paris Dreaming is the ultimate chic, personal and charming memoir – not just for women who love Paris, but for anyone in search of that elusive good life.

What’s your idea of the perfect day in Paris?

I have so many perfect Parisian days! But if I had to choose just one, this would be my ultimate to-do list …

Splurging on breakfast at Angelina, making sure to order the luscious chocolat chaud à l’ancienne; browsing at Galignani bookstore next door; wandering around the Tuileries Garden just opposite, then lounging on one of the green chairs, to smell the flowers — literal and otherwise.

Strolling along the banks of the Seine, down to Île Saint-Louis; criss-crossing the lovely streets of this 17th-century island; eating a Berthillon ice-cream down by the water, watching the boats and occasional swan glide by; crossing over to the other island, Île de la Cité,  and through to its tip to loll about two of my favourite Parisian squares: Place Dauphine and Square du Vert-Galant.

Flitting over the Pont Neuf to the Left Bank, checking out the bouquinistes (those wagon-green riverside sheds that sell vintage books) then heading up Rue Bonaparte, stopping at Ladurée and Pierre Hermé for boxes of new-season macarons; popping into Café de Flore or Les Deux Magots for a quick snack (and probably a sneaky coupe of champagne); spending an hour or so in the Luxembourg Garden to consume said macarons, and generally be in the wonderful moment.

Winding down to the Latin Quarter, ending up in the rabbit’s hole that is the legendary Shakespeare & Co; returning to the Right Bank, and working my way up to the Marais; circling the Place des Vosges, then weaving through the old streets over to Les Halles and into the divine gardens and arcades of Palais Royal, for more sitting and sighing; continuing westwards to Place Vendôme, to be at the Ritz right on 6pm, when Bar Hemingway opens, to prop myself at the bar with a flower-adorned cocktail.

Heading back to the Seine to stroll towards the Eiffel Tower; watching it twinkle while standing on the city’s most fabulously flamboyant bridge, the Pont Alexandre III; finishing with some more sparkle – of the champagne kind – at a glamorous bar, like Les Ambassadeurs in the Hôtel de Crillon. 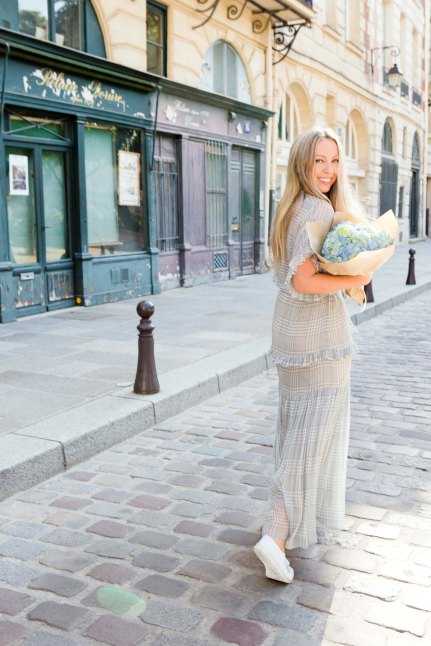 Live on baguettes and happiness, and walk as much as possible.

What would you suggest for a splurge?

An ultimate French feast at La Tour d’Argent or Le Grand Véfour – the lunch services are usually much cheaper than the dinners.

Any hidden gems you’ve never seen in a guidebook?

There’s a whole other Parisian world behind the old coach doors. It’s private, of course, but you can often catch a good glimpse of beautiful ivy-covered, flower-speckled cobbled-courtyards when residents slip out, because these heavy doors take so long to creak closed. If you’re feeling brave, you could even slip in for a respectful look around. Just beware of cranky concierges! 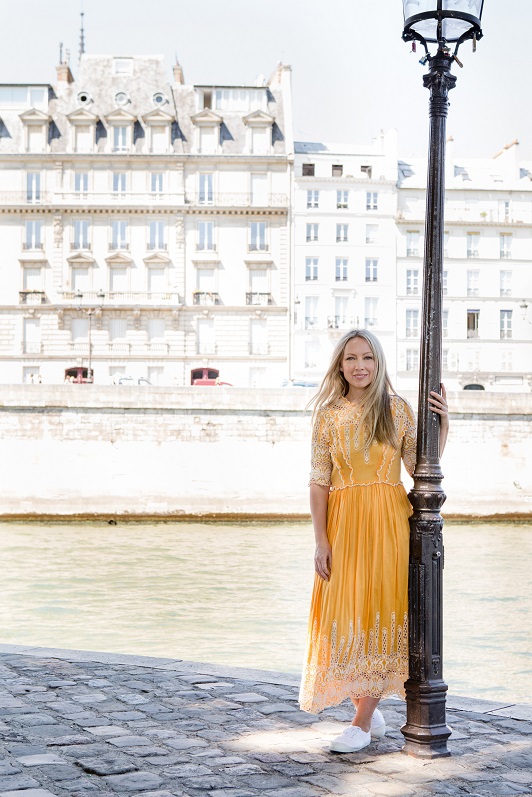 Which book would you recommend to a Francophile reader?

I can never go past Almost French by Sarah Turnbull for her spot-on insight into Parisian culture; she’s both an outsider and an honorary Parisienne, so she can be at once objective and authoritative. Despite being twenty years old, the book has not dated one bit, and is still, I think, one of the best in the sub-genre of books that attempt to decode the secrets of living à la parisienne – a category Almost French pretty much inspired, in fact. It’s hilarious too, just as you’d hope from a tale about a down-to-earth Aussie girl falling in amour with a suave Parisian man.

If you could have anything from France at this very moment, what would it be?

A box of Ladurée macarons; I’m devastated it has closed down in Australia!

Lastly, where can we buy your book?