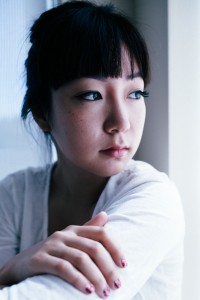 E. J. Koh is a poet, author, and translator of Korean and Japanese literary works. She has appeared in Privacy Policy: The Anthology of Surveillance Poetics (Black Ocean, 2014), TriQuarterly, Columbia Review, Narrative, and others. She earned her Masters of Fine Arts in Poetry and Literary Translation at Columbia University in New York. She was awarded a Kundiman Fellowship and The MacDowell Colony Fellowship in 2014.

I was a bad student until my poetry teacher in college discovered I had stories. So I jotted them down and published my first poem in Santa Cruz’s Matchbox Magazine. That was it. Then, I pursued an MFA for the time to solely write.

I’m currently translating the letters my mother wrote to me from South Korea while I waited for her in the States. They’re called My Mother’s Letters to My Younger Self. I’m putting the final touches on a poetry manuscript titled Child of Shame, and I’m in the middle of a literary fiction novel.

Here’s a poem called “Clearance” I wrote in New York about privacy, identity, and truths:

I do the usual coffee shop haunt. I’m around coffee so much that it’s permeated my skin. My hair and toenails smell like coffee beans. I’ll even order something embarrassing like a super praline mint mocha with whip, which is the fee I’m paying to make a table my office for the day. In the future, I’d like my own work space but I wonder if I’d get bored of it.

I work as soon as I get up. Before I check my technology or grab a bite (I don’t eat breakfast so I lied.) Right when my brain wakes up—that initial surge is directed towards writing and that’s when all the good stuff happens. I used to binge-work or sit for hours then quit early. Now I take frequent breaks and work throughout the day.

I have a pen-pal Marci who I met at my Kundiman fellowship in New York. I’ll write her a letter in pieces. At night, I’ll go to Kenpo, which is a type of mixed martial arts with Kung Fu, Karate, and Jiu Jitsu. I’ll come home with bruises and utterly satisfied.

I’ve used the video game analogy before. I’ll jot down an initial draft, and then title my document under the number 1 (as in level 1). I want to grow each of my projects and get them to higher levels. So, the drafting process becomes a gauge and rhythm. After ten drafts, my document rises to a level 10 and so on. I look at that number and my goal is to watch it grow. And as it grows, it changes, it gets better and until it is strong, covered in armor, and capable of fighting for itself, I don’t release it into the world.

Because I haven’t stopped having things to say. I can’t put a muzzle on it.

I hoped to do something that I wouldn’t regret pursuing. Perhaps it wasn’t the smartest choice, but it felt genuine to me. Now, as I watch my friends and family collide with the world financially, socially, against race and gender, I’m compelled to witness and record. A writer is not only a historian or an archaeologist, a writer is someone who disagrees.

I get ideas from listening. It’s easier to listen to others than it is to yourself. Sometimes, you quiet the noise from the outside and you sit alone for hours. You’ll soon discover not what you want to write, but what you need to.

Realizing that your buddies have had their corporate ladder-climbing jobs for a decade and you have a sort of downward cliff-diving job. Warning: don’t compare. Or you’ll lose your head.

There is no security financially or even on the completion of manuscripts. Books fail for little reason and succeed for even less than that. You have to be happy and humble solely on the opportunity to write.

I hope to think big and continue to do so throughout my career. There is something here, inside writing, inside the industry that is capable of more than it is doing now. A group of intelligent writers is a powerful thing, and getting those writers out there is important.

Personally, I’m curious about immersion—instead of boycotting against social media, using social media to benefit the exchange of discourse. I would like to see more writers starting podcasts, partaking in interviews, creating videos, using cross-genre media in order to make their work more accessible to readers. I would like to see writers choose publications based on their closeness to readers and not their closeness to critics (ie. literary journals). Writers, we stay in our world. But that world is only the size of an egg to everyone else. It’s not until we venture out of our comfort zone that we can make an impact.

WHICH FEMALE AUTHOR WOULD YOU LOVE TO HEAR MORE FROM?

* Author photo by An Rong Xu