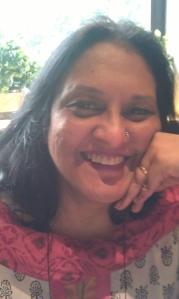 Abha Iyengar is an internationally published freelance writer, poet, and translator (Hindi to English) from New Delhi. She is also a British Council-certified creative writing facilitator. Her published works are Yearnings (poetry), Flash Bites (flash fiction), Many Fish to Fry and Shrayan (novels), the latter having been honoured with the BtB Literary Award 2012. She won The Mariner Award 2010, The Lavanya Sankaran Writing Fellowship 2010, and The Kota Press Poetry Anthology Contest. She was a finalist in The FlashMob 2013 Flash Fiction Contest. Her poem film “Parwaaz” won a special jury prize at the film festival in Greece and was screened to acclaim at other international film festivals. Her work has appeared in journals such as Dead Drunk Dublin, Kritya, Muse India, The Asian Writer, and Pure Slush, among others. She has also written several screenplays.

In 2001, I wrote a creative non-fiction piece and it was selected for publication overseas. The internet has been the medium of my transformation.

I have a novella titled Many Fish to Fry recently published by Pure Slush (Australia). It’s a light and quirky read.

Want to purchase Many Fish to Fry?

A collection of short stories titled The Gourd Seller and Other Stories, published by Kitaab (Singapore), is to be launched in February 2015.

I work from home.

WHEN DO YOU WORK?

As soon as I arise. My brain is over-active at the time and very alert.

Just sitting and writing. Most of my thinking happens when I arise from bed, or when I am walking. The rest of it happens on the go, as I write.

I just want to. It is extremely fulfilling and validating.

I think there is a point in life when you just decide. And then you must follow through to make it happen, despite what everyone else says. It is not something that people (in general) take very seriously, though I have never understood why.

It is the one driving force that makes me so alive and happy.

Other writers and their work. And I get ideas from everywhere. A conversation, a book, a phrase, a dream.

Concentrating and not letting the rest of the world intrude upon my concentration.

And working from home has its advantages, but also its disadvantages. While you can work in your pajamas, you also have to be available for social visitors and the immediate demands of everyday life.

WHAT IS YOUR VISION AS A WORD ARTIST OR INDUSTRY PROFESSIONAL?

I want to write as many novels and short stories as I possibly can, and reach a wider audience.

I would like to see an acceptance of the writer as a potent force by a larger number of people.

Also, being an older writer, who came upon her passion for writing rather late in life, I feel that while younger writers are encouraged with rewards and grants, there is hardly anything going for the older writer in the form of encouragement or recognition. So I would like to see some grants, residencies, and honours happening (especially in India) specifically for older writers.

There is a young writer called Janice Pariat whose work I have recently read. I am quite blown away by her writing.

There are several Indian writers who write wonderfully well. I would like the writer Monideepa Sahu to be featured here.

* Author photo by Vinod A. Iyengar