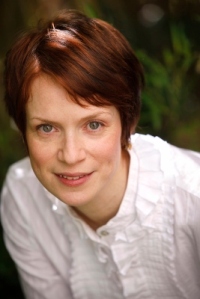 Alexa Moses is an Australian novelist and screenwriter. She graduated with a Masters degree in screenwriting from the Australian Film, Television and Radio School in 2001 thinking she wanted to write comedy, but got a job as a reporter at The Sydney Morning Herald instead. Over her six years at the Herald, she worked as an arts and features writer, film reviewer, and entertainment reporter.

In 2007, she won a Varuna HarperCollins fellowship for her first manuscript. Since then, she has been working as a children’s novelist—with the middle-grade books set in ancient Egypt, Slave Girl and Talk Like An Ancient Egyptian, published by HarperCollins Australia—and as a screenwriter for children’s television including Tashi, The Woodlies, and Hoopla Doopla!

Ever since I was small I wanted to be an author, but for years I lacked the confidence even though I wrote journals and stories for myself. After university I started working as a research psychologist, while still writing on the side. Finally I applied for the Australian Film Television and Radio school and was accepted—and that made me believe I could be a writer.

I’m working on a fantasy-adventure fiction series for children aged 8-12, called Gideon Glove which I’m ridiculously excited about—I jump around the kitchen just thinking of it. I’m putting the finishing touches to the first book now, and crossing fingers it will be published in 2016.

I either work on my bed with my laptop propped on a pillow, or at the kitchen table while something’s cooking on the stove. Occasionally I use my desk, which would be better for my back.

At the moment, whenever my kids are at school and preschool, and the baby’s napping. When I’m on a deadline I work at night, too, but after the school-pickup-homework-kids’-dinner-bath-breastfeeding-bedtime-grownup-dinner thing, i.e. 3-7.30pm, I’m mostly too tired. Since I had my youngest kid in May, I’ve had a nanny one day a week, and that’s been a blissful working day. Next year as the baby gets older, I’ll work more.

For books, I spend years dreaming up worlds and characters while I’m working on other things. Then, when the new story and characters feel cooked, I spend a chunk of time plotting before I start writing a first draft. Although it changes as I write the first draft, I like to have a map before I dive in.

Television works differently—usually, freelance scriptwriters are hired to work on a program, and we plot episodes as a small group, which is a lot of fun. Individual writers then go home and write their episodes off those rough plots, changing them in consultation with the show’s script producer, who is a TV writer’s head honcho.

I’ve never wanted to do anything else.

Authors like Hilary Mantel, Sarah Waters, and Helen Garner for her non-fiction. John Green, Dav Pilkey and of course J. K. Rowling, for children’s books. Television writer-producers like Larry David of Curb Your Enthusiasm fame, and Abbi Jacobson and Ilana Glazer who did the crude and hysterically funny Broad City.

Envy. It’s easy to obsess over someone else’s advance or publicity or award. Envy is like a slavering, self-piteous pet—“I’m being ignored!” it whines, “What about me!—and letting it have its head sucks away your creativity. To me, envy feels shameful and hard to admit to, although most writers I know have felt it. Working is the only way I’ve found to dispel it.

WHAT IS YOUR VISION AS A WORD ARTIST OR INDUSTRY PROFESSIONAL?
I don’t have anything as grand as a vision. I just put my head down and work and read myself silly, and feel lucky to be able to write for a living.

WHICH FEMALE AUTHORS WOULD YOU LIKE TO SEE INTERVIEWED ON WORDMOTHERS NEXT?
Two Australian writers: R. A. Spratt, author of the insanely funny Nanny Piggins series—she’s also a television writer and a mother—and the sharp, down-to-earth Allison Tait, who writes the new Mapmaker Chronicles adventure series, which is terrific.