London-born Rosie Garland is a novelist, poet, and singer in post-punk band The March Violets. She also appears in cabaret as twisted alter-ego Rosie Lugosi the Vampire Queen. She has toured internationally, from the Cheltenham Festival of Literature to the Bowery Poetry Club (New York), from Latitude Festival to Gotik-Wave Treffen (Leipzig).

Rosie is also the author of five solo collections of poetry, including Everything Must Go (Holland Park Press 2012) and Things I Did While I Was Dead (Flapjack Press, 2010). Her debut novel, The Palace of Curiosities (HarperCollins 2013), won the 2012 Mslexia novel competition and was awarded Co-operative Bank Book of the Year 2013. Her latest novel, Vixen (HarperCollins 2014), was nominated for the Green Carnation Prize 2014.

The Palace of Curiosities by Rosie Garland

I was a reader. Even more fabulously, I was read to. Early on, I discovered the joy of being transported to other worlds via the magic of words. It wasn’t long before I started telling my own tales. I have a cough-sweet tin filled with books I created for my dolls, and wrote my first novel aged nine – a thrilling adventure involving super-heroines, spaceships and sharks. With pictures.

In fact, on the (mercifully rare) occasions I meet someone who professes to be a writer and yet not have time to read, my chin taps the floor. As Stephen King said: “This is like a guy starting up Mount Everest saying that he didn’t have time to buy any rope or pitons.”

My second novel, Vixen, is out in paperback on February 12th and there’s a busy book tour coming up. The book is set in 1349, the year the Black Death arrived in England. This springs from my fascination with eras when the world was on the cusp of massive change.

I’m currently writing new poetry. In particular, a sequence of narrative poems inspired by the 2 years I worked as a teacher in Darfur, Sudan. Truly a stranger in a strange land. I’m getting on with my next novel for HarperCollins too, though it’s at that stage where I hate it, and it’s little more than a tangled heap of words.

I’m also treading the boards as Rosie Lugosi the Vampire Queen, and my band, The March Violets, are touring Europe and the USA in autumn 2015 with our new album, Made Glorious.

I love all the interesting projects that come into my life, and am particularly excited about being invited to co-curate the John Rylands Library Literary Gothic exhibition in summer 2015.

I count myself as very, very lucky. I have a room of my own, to paraphrase Virginia Woolf. It’s lined with bookcases and every square inch is stacked with bits and pieces picked up over the years (from Californian sand dollars to statues of Kali and all points in between).

I’m a writer who likes peace to scribble – which is the word I use to describe first-stage work. I love the physicality of handwriting at this stage. When I’ve got to the editing stage, I move to the computer. I know a number of creatives who find music conducive to work – I guess I’m one who prefers quiet. I think it’s to do with the fact that I love music – if I listen to music while I’m writing, I end up singing along and writing goes up the spout. 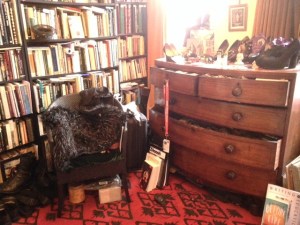 I’m one of those “morning people”. I like to get started early. Part of it is because the world is not yet fully awake and that sense of possibility fires me up. Another reason is that I have a vicious internal critic who persists in telling me that everything I do is complete crap. She’s a late riser, so I get up before she does and get started before the head talk kicks in.

One of the things I wrestle with is the balance between writing and admin / social networking. A certain amount of the latter is unavoidable, but I refuse to let it take over my life. I do admin in the afternoon. When I’m on a roll, I’ll write into the evenings. It varies.

Also important is for me to take breaks. Not just to move the muscles, but to stay fresh. I take a leaf out of Julia Cameron’s “The Artist’s Way” and go on an Artists’ Date at least once a week: visit a museum, a gallery, or hang out with a creative friend.

I use creative rituals to get me started in the morning. I’m not alone in being terrified of the blank page and a routine with small steps helps get the creative juices flowing. My day begins with three pages of journaling. This is not so much creative writing as a place to clear the mind.

Right now, I like the exercise of writing six images, and out of the six images, I write a haiku. Then the classic morning pages: three pages of free writing. With those warm-ups under my belt, I get cracking on a heftier task like editing a chapter. An athlete wouldn’t run a marathon from cold. My take is that a novelist functions in much the same way.

I want to grow, so seek out feedback and input. That might be going on a writing course, a writing retreat, getting feedback from creative colleagues, agent or editor. I am hungry to learn. For me, writing is a life process and is never done. At the age of 90, Pablo Casals was asked why he continued to practice the cello. “Because I think I’m making progress,” was his reply.

There are times when I feel writing chose me. I write because I am made of stories. I write to work out and express how I think and feel. Roald Dahl said: “A person is a fool to become a writer. His only compensation is absolute freedom. He has no master except his own soul, and that, I am sure, is why he does it.”

The odd, the unusual, the folk who don’t fit. I’ve always written about outsiders; whoever they might be. My fiction is about people who won’t (or can’t) squeeze into the one-size-fits-all templates on offer and the friction that occurs when they try.

I know this comes from having always been an outsider myself. My mother used to ask, “Why can’t you write nice stories?” However, I don’t explore dark themes as some kind of pose, or to be challenging for the sake of it. I write what I write because that’s what comes knocking and where my passions reside.

I’ve chased myself in circles trying to second-guess what a publisher might want and it was a disaster. There’s no point twisting yourself into shapes trying to please. That way lies madness, and not the interesting, creative sort. Maybe it’s one of the reasons it took so long to get my novels published. But that’s a different blog: Rosie on getting her first novel publised

As I mentioned above, I struggle with an internal critic who never says anything nice and never, ever stops. It’s been there since I was in my early teens, and shows no sign of going away. I used to listen to and believe every word I heard. Result? I stopped writing. Call it writers’ block if you will. An important part of my writing life has been improving how I deal with internalised put-downs.

The first step was to call the voice “Mavis”. Here’s a post about it:

Rosie on dealing with the internal critic

WHICH FEMALE AUTHORS WOULD YOU LIKE TO HEAR MORE FROM OR SEE INTERVIEWED ON WORDMOTHERS NEXT?

I love the short stories and poetry of Char March. Jo Bell is an astonishing poet, as is Steph Pike and Angela Topping (appearing on WordMothers soon!) – and they are about as different as you can imagine! Cathy Bryant is one of the most generous writers I know, and Rose Collis is a marvellous creator of biographies.

One thought on “Meet Rosie Garland”