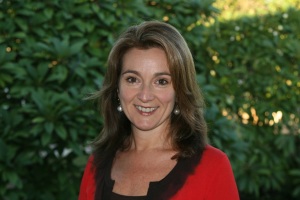 Julie Fison is the author of eleven books for children and young adults. Her books include the Hazard River series for young adventure lovers and titles in the Choose Your Own Ever After series for girls aged 10 – 14. Julie has also written three books for young adults. The latest, Counterfeit Love, about an ambitious young television reporter trying to make a name for herself in Hong Kong, was inspired by Julie’s own time in Asia.

My first foray into fiction was inspired by a family holiday on the beautiful Noosa River in Queensland. My two sons teamed up with friends and spent the summer dodging stingrays, exploring the bush and building secret camps. I had to write about it.

I had no experience in writing fiction for children, but I had spent a decade working as a television news reporter in Australia, Hong Kong and London. I rather naively thought that this would see me through, but it turned out I had a lot to learn. My children, who were five and eight at the time, set me straight when my writing got too newsy!

By the end of the summer I had written two books about a gang of kids holidaying on Hazard River, coming up against rogue fishermen, smugglers and dodgy developers. The stories were full of fun and adventure, with a subtle message about threatened wildlife. My kids loved them. I just hoped that I could find a publisher who felt the same way.

I had my fair share of rejections, but I had enough encouraging feedback to continue writing about the gang at Hazard River. A year or so later I met Ford Street Publishing’s Paul Collins at a book launch. I used the opportunity to subtly sidle up to Paul and pitch my books. (Paul tells a different version – apparently I wasn’t too subtle!) A month later I had a four-book contract. Less than two years later Ford Street Publishing had released six books in the Hazard River series – Shark Frenzy, Tiger Terror, Bat Attack, Snake Surprise, Toads’ Revenge and Blood Money.

My most recent books are for girls. I’ve written two stories for the Choose Your Own Ever After series (Hardie Grant Egmont) – How to Get to Rio and The Call of the Wild. The books let the reader decide how the story goes – with girlfriend dramas, boy troubles, family fun and plenty of decisions along the way.

In How to Get to Rio schoolgirl Kitty McLean has to decide whether to go camping with her old friends or spend the holidays at an exclusive beach resort with her new friend. The big decision for nature-loving Phoebe in The Call of the Wild is whether to go to a party with her besties or help out at the save-the-orangutan fundraiser.

The emphasis is on fun, but the stories present realistic dilemmas for girls to consider. For every choice there’s a consequence. But unlike other stories in the choose-your-own-adventure genre, no one dies in this series when they make a bad choice!

My latest book for young adults is Counterfeit Love. Lucy Yang is an ambitious young television news reporter trying to get to the bottom of a murky story. It was inspired by my years as a reporter in Hong Kong, but Lucy gets into more trouble than I ever did!

I write best when I’m sitting at my desk. I don’t like distractions of any kind – which is very strange after working in a noisy, smoky newsroom.

Once I have an idea in my head I write quickly. I settle myself in front of my computer and pound away for as much of the day as I can. I forget to pick up the kids from school, I ignore requests for dinner and Molly, the dog, looks on forlornly waiting for some attention. When I need a break to recharge my ideas I dash around getting chores done and take Molly for a walk. I find walking, bike-riding and napping extremely useful for getting through any kind of block.

I always have an idea of where a story will start and finish before I begin writing. The details of the middle section get worked out as I go along. The Choose Your Own Ever After series was an exception. Each story has eight possible endings and various other choices along the way, so there were a lot of threads to tie in. I couldn’t just wing it with those stories; the plots had to be meticulously planned.

I write because I enjoy it. Also, it gives me an excuse to read a lot (to improve my writing), to travel (for inspiration) and to nap during the day (because it clears my head).

I get my ideas from everywhere – my own misadventures, things that happen to my children, stories I read in the paper, conversations I overhear. Everything! Places that I love also feature heavily in my stories. Noosa is the setting for my first YA novel – Tall, Dark and Distant. The magical ruined city of Angkor, in Cambodia, is the backdrop for Lust and Found, while Counterfeit Love takes place in my old stomping ground – Hong Kong.

Deciding what to write can be very difficult. It’s very frustrating to have a head full of ideas and no idea of which one is going to work out.

I don’t think I was prepared for how much work goes into a book after it is published. Marketing is a vital aspect of writing, and school visits are an essential part of the job if you write for children. Anyone with a flair for stand-up comedy has an advantage in front of a group of school kids!

Any of the above.