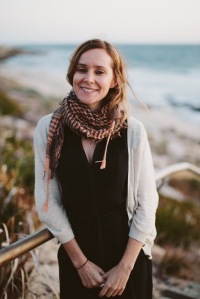 Brooke Davis grew up in Bellbrae, Victoria, and now lives in Perth, where she works as a bookseller. She holds an Honours degree from the University of Canberra and a PhD from Curtin University, both in the field of creative writing. In 2015, Lost & Found, her first novel, received the ABIA Award for General Fiction Book of the Year, the ABIA Award for New Writer, and the iBooks Fiction Book of the Year. It was also short-listed for the Indie Awards Debut and the ABA Awards Book of the Year, and long-listed for the International Dublin Literary Award. Lost & Found will be published in twenty-eight countries.

I’ve kept journals since I was quite young, and there’s a line in one when I was eight years old that says, pretty precociously, ‘I’m determined to become a writer.’ When I was nine or ten, I wrote this nonsense poem in the style of Roald Dahl in primary school about my little brother called The Pest (it obviously wasn’t overly complimentary!). My teacher asked me to read it out loud in front of the class—my classmates laughed in all the right spots, and I was urged to do a sequel. The sequel was terrible and didn’t have the same impact, but I remember the feeling of my writing giving people pleasure.

I assumed I wouldn’t get published for years, if at all—it really is difficult to get published in the current climate, and working as a bookseller, I’m so aware of that. There are so many good books in the world, and they often take such a long time to find the right person. I wanted to set up a life that I was happy with if I didn’t ever get anything published, so I work at a beautiful bookshop in Perth called Beaufort Street Books, and I sometimes teach at Curtin Uni, also in Perth.

I spent five years writing Lost & Found as part of my PhD. It was a reaction to the sudden death of my mum: I wanted to spend time thinking deeply about what it meant to grieve, and what it meant to live with the knowledge that the people you love will die. When I finally completed the PhD, a bookseller friend of mine in Perth read Lost & Found and told a mutual friend of ours—Todd—about it. Todd happens to be a Hachette account manager and he rang me and said, ‘Would you like me to take this to head office at Hachette and see what they think?’ Before he’d even finished the sentence, I said ‘Yes, please.’ I was picturing teetering slush piles and not expecting to hear back for months, if at all. But within a couple of weeks, Vanessa from Hachette had rung me and made an offer, and suddenly I had an agent, and the contract was negotiated and agreed upon. It was a bit of a whirlwind. I was actually on holiday in St John’s, Newfoundland, Canada at the time, and after everything had been finalised, I took myself off to this pub and propped myself up at the bar, and I just sat there on my own, kind of giddy with it all. I got to talking to some people, and by the end of the night, all these lovely strangers were buying me drinks to help me celebrate. It was a truly gorgeous moment in my life.

Lost & Found is very much a work of fiction but it comes from a really personal place. About eight years ago, I was on a trip around the world and rang home to find out my mum had died in a freak accident. It took me ages to start writing fiction again, but when I did, the character that came first was a little girl obsessed with death. She’d become seven-year-old Millie Bird. Agatha Pantha came next, an elderly and grumpy woman who didn’t want to know about death. About two years into the writing of the novel, Karl the Touch Typist—an elderly man wanting to relive his youth—became a part of the story, too.

In Lost & Found, these three characters live in a small town on the South West Coast of WA. At the beginning, Millie has just been abandoned at a department store by her mum, Agatha hasn’t left her house in seven years since her husband died, and Karl has just escaped from his nursing home. They meet, and, together, go on a pretty unusual road trip across Australia.

My work environment for the past year or so has been everywhere but my own desk (trains, cafés, parks, libraries, planes, ferries) as I’ve been on the road for most of it. I do really like working in different spaces as I find it really stimulating. But here’s a pic of the desk in my room as I was writing Lost & Found. (My entire room actually looked like this—my walls were covered with the pages of a very messy early draft.)

I’m a pretty disciplined, hard-working type, but I’ve also learned that I need to be kind to myself to get the best out of myself, so I focus on living a balanced lifestyle. I love to write and it’s important to me, but I also love my life outside of that. I love being social, I love thinking about things that don’t relate to writing, I love healthy food and exercise. Time away from writing is really important to my life as a writer.

I try to keep my life calm and quiet when I’m writing and bookend my writing days with some sort of exercise and time for self-reflection, but people are really important to my writing, too. I love being in cafés to absorb the behaviours of people around me. It’s often called ‘people-watching’, but that implies a certain kind of voyeurism, or staring. I don’t do that. I don’t sit there with the intention of staring at people and stealing their lives; it’s more a process of incidental absorption.

I work my best in the mornings. There’s a stillness and a quietness and a potential that doesn’t exist at any other time of day. The down side to this is that I’m completely useless after about 2pm!

I most definitely don’t need to write every day, but if you told me I could never write again, I’d feel an enormous sense of loss. I’d feel unanchored and not as present. For me, writing means the difference between a connected life and a disconnected one.

I don’t think there’s a magic formula: ideas are just there sometimes, and other times they’re not, no matter how much I want them to be. Sentences and scenarios and characters will appear in my head and I’ll feel my way through the shadows to bring them closer. Sometimes this happens in a contrived setting, when I sit down at a desk with the very explicit task of HAVING IDEAS, sometimes it’ll be more organic, when I’m talking or listening or watching or reading, and there’ll be a spark of something, and my brain will feel like it’s all lit up, and there’ll be that urgency to record the thought.

Other times it’s because I’m being curious and want to work out what everyone’s up to. I’ll be walking down the street and see a woman wearing a hat on her head with a fake bird on top of it. I’ll think: Wow, there’s a lady with a fake bird on her head. Is it a stuffed bird? Was it her favourite pet? Does she have more? And then suddenly her name’s Doris and she lives in the bush, Gooligulch-style, and she has daily conversations with birds. I ask myself ‘what if?’ and ‘why?’ questions all the time, and I might exaggerate the outcome, or push it into fiction.

Oh, the usual things that I’m sure any artist can identify with: crippling self-doubt, finding yourself doing anything else in the world (scrubbing the ceiling or colour-coding your fridge or rearranging things in your drawers so they’re at right angles with each other) to avoid writing, trying to remember that it’s not a silly thing to spend time sitting on your bum making stuff up. The most surprising challenge for me has been dealing with the strangeness of suddenly having an audience; of suddenly having my writing subjected to expectations from strangers. My entire life I’ve written because I wanted to, and I’ve written for myself and my family. But now there are complete strangers saying, ‘Looking forward to your next book!’ And I remember I won’t just be printing my next book out at Officeworks and stapling it together as a cheap Christmas gift for my dad. It’s a whole new, terrifying, exciting landscape for me to be writing in.

That I would actually finish writing a whole book! I never truly believed that would happen.

If I’m honest, the only artistic/professional thing I really, really wanted to achieve in this life was the publishing of a book, and that’s done now. So I just want to keep making stuff. Art, a life, friends. I want to write and read and write and read, keep as healthy as I can, love my friends and family, and have fun.

I met a one-hundred year-old woman on a long-distance train in Canada last year and I asked her what her secret to a long life was. She said ‘just have fun’ and I believe her.

There’s lots, of course, but here’s a few: Alice Munro. Kate Grenville. Helen Garner. Meg Wollitzer. Zadie Smith. Jennifer Egan. Janet Frame. Robin Klein. Judy Blume. My friend Sarah Hart who hasn’t had much published but is one of the best writers I know. Hopefully you’ll know her one day!

And thank you, Inga Simpson and Yvette Walker, for recommending Brooke!