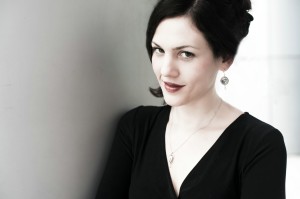 Rachel DeWoskin’s fourth book, the critically acclaimed novel, Blind, was published by Penguin in August, 2014. Her novel Big Girl Small (FSG 2011) received the 2012 American Library Association’s Alex Award and was named one of the top 3 books of 2011 by Newsday. DeWoskin’s memoir, Foreign Babes in Beijing (WW Norton 2005), about the years she spent in China as the unlikely star of a Chinese soap opera, has been published in six countries, optioned first by Paramount for a feature film and then by HBO to be developed into a television series for which DeWoskin co-wrote the pilot episode. Her debut novel, Repeat After Me (The Overlook Press, 2009), about a Chinese dissident navigating New York City in 1989, won a ForeWord Magazine Book of the Year Award.

DeWoskin has written essays and articles for Vanity Fair, The Sunday Times Magazine of London, Teachers and Writers, and anthologies including Found: Requiem for a Paper Bag, and Wanderlust. Her poems have appeared in journals including Ploughshares, Seneca Review, New Delta Review, Nerve Magazine and The New Orleans Review. She teaches fiction at the University of Chicago.

For my entire adolescence I wrote terrible (rhyming) poems about falling in love and breaking up with high-school athletes. My mom used to worry that I’d work for a greeting card company.

I moved to Beijing on a whim after graduation from college. My first “real” job was a corporate consulting gig, and then I also ended up acting on a Chinese soap opera – both jobs for which I was woefully under-qualified and untalented. But in both, I used writing to stay afloat. Consulting, I wrote press releases, speeches, and presentations, took information I couldn’t understand (market entry strategies for companies coming to China) and turned it via English words into ideas that made sense to me. On the set of the soap, I learned to speak Chinese, to read dialogue, and to write notes to my co-stars. This gave me a gradual grip on who I was – something I figured out by way of a language that was unfamiliar, inspiring, and difficult. At night, I wrote copious notes in my diary, trying to work out the nuances of my days.

When I read the work of American Poet Laureate Robert Pinsky in the late 1990s, I decided I wanted to move back to American and study poetry with him. So I did that, came home for a perfect repatriation: graduate school with a generous and brilliant master of the English language. And then I turned the full force of my energy toward writing and revising, making the work its own means and end. I wrote my first book, Foreign Babes in Beijing; Behind the Scenes of a New China, as a way to tell the story of what I’d seen in the 1990s in Beijing, and to explore questions of culture, identity, the worlds and imaginations of my Chinese friends, and my own ludicrous life as a soap opera star. When I finished the book, I got an agent in the usual way – a particularly lovely reader, brilliant strategist and thinker named Jill Grinberg – and she sold the book to WW Norton for me.

My most recent book is a novel called Blind (Penguin 2014), which I began to imagine and write when my two little girls and I read The Black Book of Colors every night for a year. I was both terrified and inspired by that shiny, embossed wonder, a children’s book full of images you can feel rather than see. The more we touched those pages, the more I wondered what it would be like to be able to see and then lose that ability. Would my memories stay visual? Would my senses cross so that I could taste, smell and hear colors? What would language look and feel like, and how would I read, think and make meaning of the world? What if one of my daughters lost her vision? We would read with our fingers and voices, take in books, each other, and everything around us in an utterly changed way. The stakes would be astronomical. What if feeling became our way of seeing?

I wrote Emma Sasha Silver’s story so I could try to feel my way through someone else’s experience, my favorite part of both reading and writing. Emma is the heroine I wanted for my daughters, a complicated and 3-D girl who ultimately manages to be a warrior when faced with staggeringly painful circumstances. Like so many teenagers I know, she is tenacious, scrappy, funny, and difficult. She is resilient not only because she musters up her own courage, but also because the girls around her are kind. Emma’s friends, sisters, and parents are like mine: flawed but loving, trying to be their best selves even in the worst possible moments. There are no saints in Blind, but girls take care of each other when it matters most because for me, that experience is true and urgent.

In order to dream Emma up, I spent last year studying Braille, going to “beep ball” games and eating ice cream with blind teenagers, trying on glasses, tripping over white canes, and learning basic geometry with a teacher who taught me to feel shapes on a magnetic board. I talked to blind girls who told me they always wear nude bras, so the colors won’t show through, no matter what t-shirt they might accidentally choose. I felt clothing labels Braille-d onto little squares cut from milk jugs, learned to tell a blue eye-liner (one rainbow loom band around the top) from a red lip-liner (two bands). I got how and why blind girls like to wear make-up. I was reminded that kids are kids no matter what their particular challenges, everyone working on the same universal projects: to figure out who we are and how to engage in the world in meaningful ways. Blind is for all those kids, and for my daughters, an exploration of what we need in order to stay on the opposite side of loneliness: each other, curiosity, love, empathy, and books.

Writing Blind let me do what I want my girls – and all girls – to get to do as many times as they can, all their lives. To close my eyes and open my imagination to the fantastic possibilities of a new way to look at – and see – the world.

Click here to purchase Blind on Indie Bound or Amazon

I have a small office – a room of my own – with my poetry and non-fiction books (my husband and I keep all our novels at home!), an espresso maker, and a laptop. It’s on a high floor, and looks out over a little bit of the world. I don’t do anything there but write. I go every day in the morning after taking my sweet girls to school, and then I write for three hours, sitting, sometimes wildly inspired, sometimes blinking out the window, but always diligent about showing up. And I only drink coffee when I’m there, which makes me feel like I love writing (when in fact I just love coffee).

I write many pages in fits of inspiration; I have endless ideas. But I don’t make the work good until I revise, and I often have to revise for years in order to shape my ideas and pages into books that have momentum and meaning.

I love books. And I’ve always needed to write. In order to make sense of the world and my position in it, and in order to imagine other people as fully as I need to in order to be a fully realized human being. And there are certain ideas and stories I want in the world. When I wrote my novel, Big Girl Small, I did it because I wanted to think and write and talk about how resilient I think girls are (and how rarely I think young girls get credit for being the warriors they can be, no matter how difficult their contexts/circumstances). One of my daughters, who was 4 years old at the time, loved The Wizard of Oz pathologically – we watched it 93,000 times, and she spent her days dressed as Dorothy – while I watched with horror the actors playing the “munchkins”. Why did these professionally trained, dignified actors have to wear rompers, lick giant lollipops, and then get no billing in the final credit sequence?! I was in a fit of wonder about what it would feel like for my daughter if she were her exact same self, but in a small body. How would she navigate her reasonable desire to be the ingénue, Dorothy/Judy, if she involuntarily identified with the “munchkins” of our cultural media world? And had no name in the credits? So I wrote that book about a kid who has external manifestations of an internal situation I think we all have: she feels small. And I gave myself (and all kids) a way to imagine her being amazingly brave and okay anyway.

Books. Love. My girls. My parents. My husband. Cities I love (Beijing, New York, Chicago, Shanghai), the way the light looks, the feeling of swimming in Beijing’s drinking water reservoir at 20, losing a friend I needed and adored when we were both only 25, everything. I want to write down almost everything I see, think, feel, and wonder. So I can be in a conversation with the world about it, and so I can understand what questions to ask, what narratives to build.

Revising. Making the syntax beautiful. Getting the meter and the shape of each sentence right when there are so many sentences necessary. Making each book move and matter.

That there would always be ebb and flow. That writing is a liquid process and we’re all contributing to a buzzing, lovely conversation in the world.