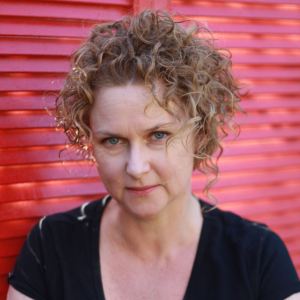 Emma Viskic is the author of the critically acclaimed crime novel, Resurrection Bay (Echo Publishing, 2015). She has won both the Ned Kelly S.D. Harvey Award, and the New England Thunderbolt Prize for her short form fiction, and has been published in Award Winning Australian Writing. A classical clarinettist by training, she lives in Melbourne’s inner north and divides her time between writing, performing and teaching. She is currently working on the sequel to Resurrection Bay.

I’ve been writing since I could read, but my music career consumed most of my time and energy for many years. By the time I was thirty, I was missing writing so much it was like an ache. So I had stern words with myself, sat down, and wrote a book. The result wasn’t pretty, but I was so relieved to be writing again that I’ve barely missed a day since.

My first break was winning the Thunderbolt and Ned Kelly short story awards in consecutive years. Winning them gained me some industry recognition and gave a huge boost to my confidence. Up until then, I hadn’t shown my work to anyone.

My latest work is Resurrection Bay, a crime novel featuring Caleb Zelic, a profoundly deaf investigator. When a close friend is murdered, a sense of guilt sends Caleb on a hunt for the killer. His investigation takes him places he’d rather not go, including his hometown and estranged family.

Many of the characters in Resurrection Bay could be considered to be outsiders. I didn’t set out to write them that way, but I’ve been pondering what it means to be an outsider ever since I rocked up to primary school with my weird surname, weirder sandwiches, and love of opera. 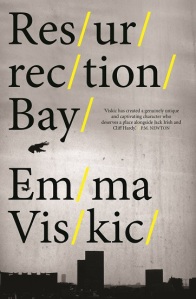 I haven’t got a study, or even a desk, so I work wherever I am. This can be anywhere from the library to the backseat of my car, but most of the time I sit cross-legged on an armchair with my dog, Otto, by my feet. If I need to escape the family I go into the bedroom. Up until now this hasn’t been a problem, but I’ve recently taken to plotting on an enormous corkboard, so it now means transferring my laptop, corkboard, pens, cardboard, scissors, pins and notebooks. 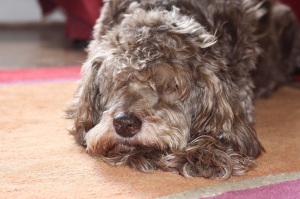 There’s no typical day. I perform, teach, and have a family, so I carve out writing time whenever I can. But I write every day, and the stories are always ticking over in my head. In the early stages of a project, I do a lot of thinking while I’m riding to work, cooking or (very rarely) vacuuming. The putting-words-down-on-paper part happens on my non-work days, and on weekends and evenings. I’ll often wait until everyone goes to bed and work until the early hours of the morning.

I usually begin a new work knowing a couple of pivotal plot points and a little about the main character. I work out the rest as I go. My first drafts are a vomitous mess of dialogue, prose, and all caps instructions to myself along the lines of, MAKE THIS BETTER, DESCRIBE and WHERE IS THIS???? Often in red. Once the dreaded first draft is down, I go back and work out where the plot’s gone astray and what I’m actually writing about. After that, the fun begins: I play with language and rhythm, and fine-tune characters’ motivations. This part feels like the reward for all the bum-on-the-seat hours. I become totally immersed in the story, and see the world through my characters’ eyes. I’m often a little bereft when I have to emerge into the real world. 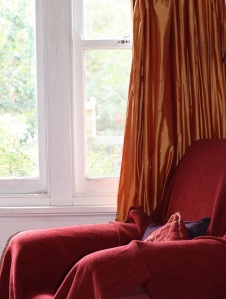 One of Emma’s writing spots

Writing has always been a way for me to make sense of this world, and to escape it. It’s also wonderfully all-consuming. When the writing is going well, I fall into the story and become completely absorbed. The downside is that not all days are good ones.

Everything around me is a source of inspiration, particularly people. I don’t base my characters’ personalities on anyone, but they often end up with similar backgrounds and traits to people I know. I’d like to say it’s planned, but it’s usually my subconscious seeping onto the page.

Fear can be crippling at times: a general fear of failure, but also the specific fear of writing a deaf protagonist. I nearly didn’t write Resurrection Bay because I was afraid of the difficulties and responsibilities that came with writing Caleb’s character. But that fear also helped me in the end. It made me think deeply and carefully about the world and characters I was creating.

How to be kind to myself. I knew from my musical training that improvement only comes with time and practice, but I was very hard on myself in those early days of writing.

My personal goal is to keep growing as a writer, and to make each book better than the last one. In terms of the publishing industry, I’d love to see a wider and more organised approach towards mentoring. I wrote the final draft of Resurrection Bay while being mentored through the WoMentoring Project, and it had a profound effect on my writing. There are some great mentor programs in Australia, but it’s still very difficult for most writers to get good quality feedback.

Where to begin and end is the problem here, so I’ll just list the authors in my current TBR pile: Hilary Mantel, Kate Atkinson, Malla Nunn, Anne Tyler, PM Newton.